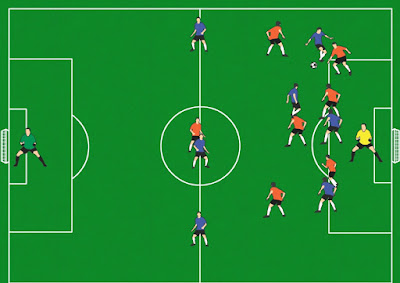 One problem we see a lot is with one-on-one defending when an opponent is bringing the ball into our zone. Too often our defenders will run up and try to stab at the ball, which is absolutely the wrong thing to do. If the attacker has control of the ball, he/she will easily just dribble around the tackle attempt. This leaves our defender doing the splits and unable to recover, meaning now the attacker has one less (or even no one) covering him/her.

What we want to do is pressure and contain the attack, slowing them down and forcing them to one side away from the goal. Remember, the sideline is a defender's teammate. If you can direct an attack toward the side and contain it, there's a good chance the ball will be turned over out of bounds. Otherwise the attacker might have to stop and pass back, or the attacker will make a bad touch and we could win the ball. Either of those three scenarios is a defensive win. Don't try to take the ball unless the attacker makes a bad touch and the ball is loose! The defender MUST be patient in this situation and remember that his job is not to tackle the ball every time, but rather to slow the attack, direct it away from the goal and pressure the attacker into making a bad play or pass back.

Below are a few drills that you can try at home in the backyard. Those of you that were on my team last fall may remember these. These are all things that the kids can work on at home without needing a partner. The more they touch the ball the better they will get!

This firt one is a basic dribbling drill that is going to be fundamental. I'd love to see everyone work on these a little bit every day, and it's a drill that we'll be doing in practices:

These next few drills are highlighting some trick moves that you can use to beat your defender 1-on-1 with a quick move and dribble.

The midfielder is the bridge between offense and defense, they bring the ball up to the forwards in attack and prevent the ball from reaching the defenders when not in possession. Without a solid midfield, it is very difficult for the forwards to score and the defense is often put at risk of the opponents’ attacks.

Let's break it down.

Passing and Trapping (Receiving) The Ball

As we begin our season, we need to make sure we have the fundamentals in place to play soccer, and it doesn't get any more fundamental than passing the ball to a teammate, and trapping (or receiving) a pass from a teammate. So often a bad pass or bad touch can lose an advantage by either slowing the attack or turning the ball over. We need to be a solid passing and trapping team in order to do anything else.

In this post we'll discuss basic passing and trapping techniques to give the kids an idea of what we're looking for going into the first practice.

In our U11 league each team plays with 8 players on the field. The formation that is typically used is a 3-3-1. This means that there are 3 backs (defenders), 3 midfielders and 1 forward (in addition to the goalkeeper). There will be times where we change formation to adjust but let's start with the basic 3-3-1. Here is a basic diagram of what this means:


In this post we'll focus on the defense, which means the backs and goalkeeper. 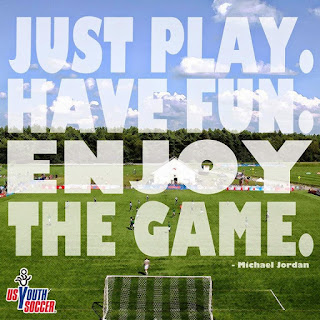