The midfielder is the bridge between offense and defense, they bring the ball up to the forwards in attack and prevent the ball from reaching the defenders when not in possession. Without a solid midfield, it is very difficult for the forwards to score and the defense is often put at risk of the opponents’ attacks.

Let's break it down.

A central midfielder (CM) is stationed at the center of the field. If he plays both offense and defense, he is called a box-to-box midfielder. The name implies that he runs from his own penalty box to the opponent’s to fulfill different roles.

A box-to-box midfielder does the following: create opportunities for the striker and stop the opponent’s attacks. Stamina, technical ability, and relentless hard-work are the attributes of this type of midfielder.


The attacking midfielder is an advanced midfield player who is primarily inclined to attack. He must have excellent ball control abilities and tactical awareness.

A playmaker occupies the same position as an attacking midfielder but performs a different role. This guy is considered the brain of the team, the most skilled player who orchestrates the attack and distributes the ball. A playmaker must be good in decision-making and as the football saying goes: when you don’t know what to do with the ball, you pass it to him.

The wing (outside midfielder) plays the same role as the attacking midfielder but he focuses his attacks from the side.

Since the winger often plays between the midfield and the offensive line, he is sometimes classified as a forward. A player who occupies this position must be fast, have excellent dribbling abilities, and be accurate with passes. A modern winger is typically flexible and can attack from the center, which makes him take over the role of a forward.

When we attack, the wings will come up their respective side. In doing so, a wing needs to be a solid dribbler, and needs to be able to beat defenders one-on-one when doing so. Once into the attacking third of the field (the third of the field with the opponent's goal), a wing with the ball should try to cross (aerial) or pass to center for a scoring opportunity. The wing without the ball should come to his near post (far post from the ball) for a quick pass from center and put-in or rebound put-back.

It is important that the wings get back on defense to support the defenders as a passing outlet when the defense wins the ball back.

When setting up an attack, the three midfielders want to maintain a triangle shape. Usually this means the CM drops bag to the top of the penalty area while the two wings and the striker (CF) push up to attack the goal. If a wing doesn't have a good shot or pass to the striker, he should look to pass back to the CM. It is important that the CM move to a position with a clear passing lane from whomever has the ball.

Take a look at the following diagram: 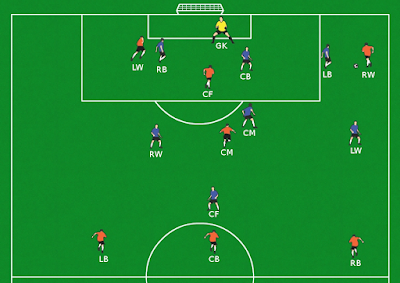 Here we see the right wing has brought the ball deep into the attacking zone. Accordingly, the left wing has come towards the center of the field, basically near the far post from the ball. The striker is positioned more or less with the mouth of the goal in front of him. The center midfielder however is slightly out of position, and in this case he should move over to the right to support the right wing in case he needs to pass back.

The most important thing we can teach in this group is knowing where to be and moving without the ball. Too often we see kids this age not moving until the ball is kicked to them or someone prompts them to move. By this time it's too late and the opporunity will be wasted. Good players move proactively, not reactively, so as to catch the opponents off guard and unable to recover in time.

When the opponents gain possession of the ball, the midfielders MUST hustle back to assist the defensive backs. EVERYONE plays defense when balls is in our own zone. That doesn't mean you're trying to steal the ball away or chasing the ball. But you have to play your position and try to limit the opponents options, keeping the ball towards the side until they make a mistake. When we stop the attack and look to counter attack, the midfielders need to be in a position close enough to receive that outlet pass from the defenders and dribble to attack up the sidelines.
Posted by Don Seiler at 5:11 PM