In our U11 league each team plays with 8 players on the field. The formation that is typically used is a 3-3-1. This means that there are 3 backs (defenders), 3 midfielders and 1 forward (in addition to the goalkeeper). There will be times where we change formation to adjust but let's start with the basic 3-3-1. Here is a basic diagram of what this means:


In this post we'll focus on the defense, which means the backs and goalkeeper.

The goalkeeper obviously is the last line of defense, and the only player that can use his hands (as long as he is in his own penalty area and the ball was not deliberately kicked to him by a teammate). In addition to the last line of defense, he is first the person in the attack. That is why it is important to make safe, strong goal kicks and throws (rolls) to teammates to start the attack.

The goalkeeper should place himself 4-5 steps in front of the goal and always be on the "ball line". The ball line is an imaginary line from the center of the goal line to the ball. So as the ball is moved from side to side, the goalkeeper shifts with it, keeping himself between the ball and the center of the goal line. He should also try not to back up when under attack, but rather step into an attack to reduce shooting angles and intimidate shooters.

Once the goalkeeper has made a stop and has possession of the ball, his job is to quickly get the ball to a teammate so that we can build up an attack. This is called distribution. Most kids think this means punting the ball as far as they can, but this is the last thing we should do. First we should see if a teammate is open for a fast bowling pass or throw. A quick, accurate pass like this at the feet of a teammate can get a counter-attack going very quickly. Only if there are no open teammates should we try to punt the ball. A punt usually results in a turnover and counter-attack by the opponent and only offers a brief rest from the previous attack.

The defenders job is to keep the ball away from the goal, especially the mouth (front) of the goal. It is much harder for the opponents to score when the ball as at the sideline. Defenders need to be quick and hard-working, and above all need to get back in position when the opposing attack comes. Defenders are the foundation of any successful team.

The center back (CB) needs to be the rock on the defense. He should usually be in the middle lane in front of the penalty box and needs to stop and clear any balls that come his way. If he can, win the ball and pass to an open full back or wing, with the point of getting the ball out from in front of the mouth of the goal. If pressure is coming, blasting the ball down the field or out of bounds is a last resort, but sometimes necessary.

Center back (and goalkeeper) should also be directing the full backs if they need to pressure the ball or drop back to cover. They should also make sure the full backs are on their proper zones so our weak side (the side away from the ball) isn't completely exposed.

The full backs are the the defenders on the side lanes, either left back (LB) or right back (RB). He is usually responsible for defending the opposing wing coming down his side, and should try to force them to the side out of bounds. The touch line (side line) is a defenders best friend and should be used whenever possible to pin attackers and force mistakes.

The full backs want to prevent attacks coming from the side and prevent wings from making passes to the center.

Full backs will also usually be the ones to receive a distribution pass from the goalkeeper, so it is important for full backs to recognize when a save is made and to get open towards their sideline. Usually the side away from the opponents attack will be more open, so the weak side full back should break to get open as soon as the goalkeeper has the ball secured.

It is EXTREMELY important for full backs to stay on their side of the field. By that we mean that an LB should not be near the right sideline, and vice-versa. The fullback's territory should go from their sideline to the center of the field. There is a fuzzy line in the center in that they can certainly cheat a little over, but they we shouldn't have a situation where both fullbacks are near each other. That would leave one side of the defense completely exposed for an easy attack if the opponent can cross or center the ball.


The diagram below illustrates the typical lateral (side-to-side) range of each of the 3 defenders. 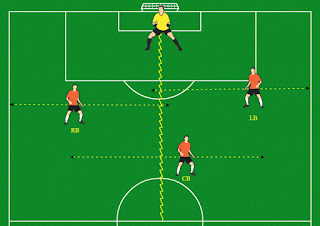 All players need to shift with the ball, both on offense and on defense. When the ball is on the right side of the field, the RB and CB should be over on that side while the LB should come to the center. Similarly, if the ball is moved to the left side of the field, the LB and CB would move left while the RB shifted to the center. The two backs on the ball side should be working to contain the ball on that side and forced to the sideline or back. The fullback at the center is there to prevent a quick pass across the field (called switching the field) for an open attack. We'll cover this in greater depth later in the season.


In the next post in this series, we'll cover the roles of the midfielders
Posted by Don Seiler at 8:03 PM